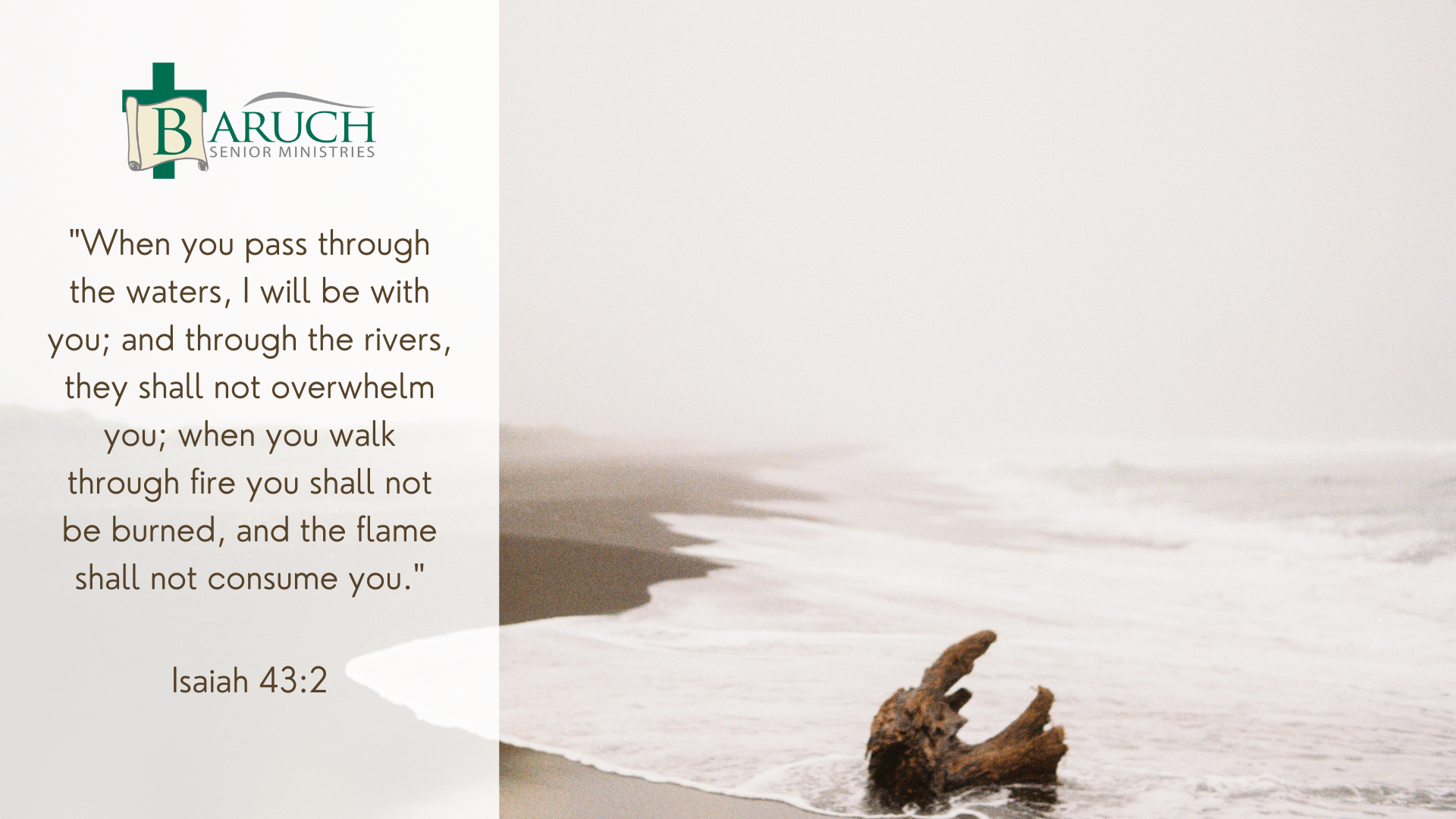 Our focus for the month of August is Thriving in God’s Protection. Isaiah 43.2 is the verse we will use to focus on God’s protection. We read, “When you pass through the waters, I will be with you; and through the rivers, they shall not overwhelm you; when you walk through fire you shall not be burned, and the flame shall not consume you”.

In Isaiah chapter 42, we see God reminding the Israelites they are his “chosen people in whom he delights” (v. 1) and in verse 6, he tells them he “will take you by the hand and keep you..” As chapter 42 continues, God also reminds Israel of their failure to hear and see what God is doing in their life. In chapter 43, God reminds Israel that in spite of their failure to hear and see, God has redeemed them and called them by name.

He will not allow them to be overwhelmed or consumed by the waters and fires of life.

We see examples of God’s people thriving in his protection. Exodus 14 tells of how, at the Red Sea, God parted the waters for his people to pass through and then let them fall upon the Egyptians, drowning them. In Joshua 3, God held the waters of the Jordan River back while the priests stood there with the Ark of the Covenant until all the people had passed through the river. We see God’s protection of Daniel and his friends from the heat of the fiery furnace in Daniel 3. All throughout scripture, God is protecting his people.

I challenge you to ask yourself how you are thriving in God’s protection this day, this week, this month. Are you feeling overwhelmed, consumed? If so, remember, God has called you and he is transforming you with the power of His redeeming grace.

Rest in his grace, Chaplain Val 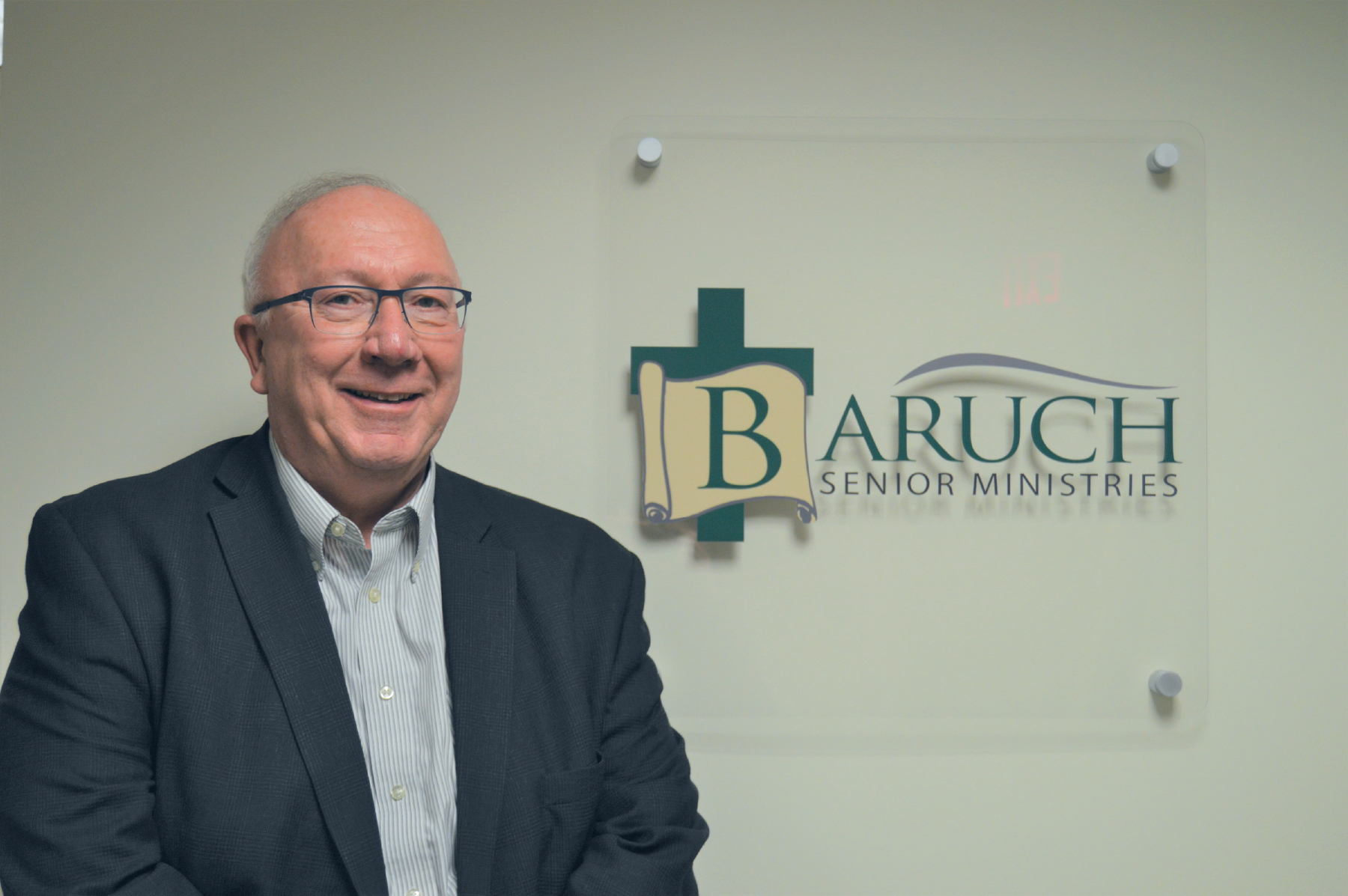 Baruch Senior Ministries, a 501(c)(3) faith-based nonprofit, and the 13th largest nonprofit assisted living provider in the country, celebrates 25 years of serving seniors throughout the state of Michigan. Along with this celebration, Baruch announced an important transition within their Executive Team.

In 1997, Baruch Senior Ministries was founded with an emphasis on the spiritual care of residents and providing an affordable program that enabled seniors to make Baruch communities their homes. The Lifetime Promise adds the assurance that they can stay even in times of financial and medical hardship. Since then, the organization has grown to serve 27 communities across the state of Michigan and plans to continue to expand its reach and mission in the coming years. While the communities served span throughout the state, Baruch’s corporate office is located in Grand Rapids, MI.

On July 1, 2022, Baruch announced that their CEO and Founder, Tom Nobel, transitioned to the part-time role of Founder & Executive Chairman. In his place, Mitch McNeal assumed the role of President and CEO. Mitch has served as the President of Baruch Senior Ministries since 2018 and has devoted 11 years in total to the organization.

As of July 1, the Executive Team also includes the promotion of Connie Clauson as Chief Operating Officer and James Tew as Chief Financial Officer. Connie has been instrumental for 22 years in overseeing Baruch operations as Executive Vice President. James has also made major contributions as Vice President of Finance and developing Baruch’s in-house finance function.

“In a few months, we will be celebrating the 25th anniversary of Baruch, and more importantly, celebrating God’s goodness and blessings over those years,” Founder Tom Nobel said, “I’m confident that the executive team will continue to look to God’s guidance while using their gifts to honor God and serve people as they age.”

Baruch Senior Ministries is a faith-based, 501(c)(3) nonprofit organization dedicated to honoring God by serving people as they age. Baruch currently has 27 assisted living communities across the state of Michigan that seek to care for seniors while upholding Biblical principles. Their focus in each community is to create a compassionate and loving environment where seniors can make a lasting home.

Baruch Senior Ministries is excited to introduce “Moving for Miles”, a new initiative that invites more individuals to participate and set personal or team goals. Individuals or teams can now bike, walk, run, jog, swim, rollerblade, or use anything that takes physical activity to move, to raise pledges and track miles. Participants can raise funds for their Baruch home of choice.

This virtual event enables anyone to participate no matter their location. This event takes place the entire month of September and will end with a celebratory gathering at Millennium Park in Grand Rapids, MI on October 1, 2022 where riders can move more miles and eat lunch with other participants.

For more details or to register, click this link: https://baruchseniorministries.regfox.com/crowd/biking-for-baruch-moving-for-miles

Baruch Senior Ministries is a faith-based, 501(c)(3) nonprofit organization dedicated to honoring God by serving people as they age. Baruch currently has 27 assisted living communities across the state of Michigan that seek to care seniors while upholding Biblical principles. Their focus in each community is to create a compassionate and loving environment where seniors can make a lasting home.